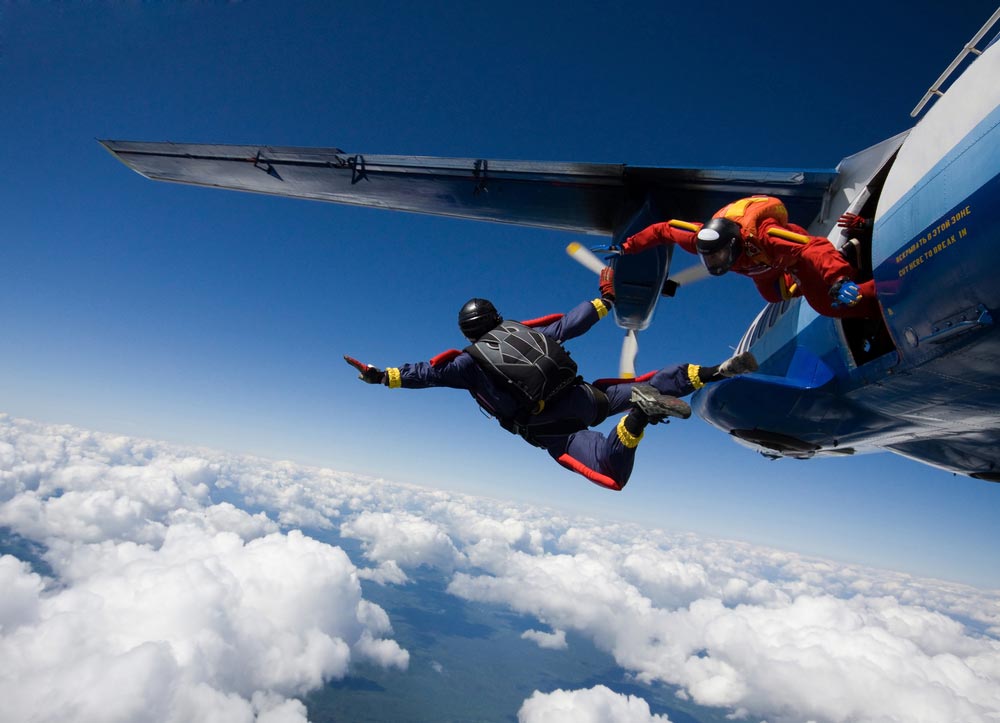 For those of us who’ve experienced any form of motion sickness, jumping out of a plane may be only one of our skydiving worries.

The other is whether you’ll start committing biological warfare on the wildlife (or watchers) below!

In short, don’t worry. While throwing up can happen while skydiving, it’s extremely rare. In the small chance that it does, it could almost always have been prevented.

And in this short guide, I’ll cover exactly how to make sure you won’t be sending surprise packages onto whatever poor animal is below you.

Make sure you’re not at risk of vomiting while skydiving by:

That’s the quick list, but there’s plenty more to know if you really want to barf-proof your belly.

Ready? Then let’s dive in.

The projectile-prevention tactics start before we even get to the dropzone.

There’s a few simple things you can make sure to avoid, and keep your stomach at it’s happiest.

Many people skydive while on a trip, or on holiday. It can be a fantastic addition to any vacation, but make sure you don’t turn up hungover! If there’s one way to mess with your body, it’s to make it totally hungover before sending it up into the sky and back down again!

Food is one of the biggest culprits when it comes to nausea. While an empty stomach isn’t great, you definitely don’t want to be chock-full of food before you squeeze into a tight harness and go on the world’s biggest drop.

The other food issue is when you’re on an empty stomach. You may think this will help, but it really doesn’t. While I’ve never known anyone to throw up, many stories online happen after the person skipped breakfast, or hadn’t eaten for hours.

The best solution is to bring plenty of things to snack on. Ideally something healthy, like fruit or trail bars, but even a snickers bar is better than going on an empty stomach.

Plus – regardless of the above – you could get stuck on a weather delay. This can mean sitting around for hours after your estimated jump time, so having a bag of goodies is a great way to pass the time.

Now, you know your own body. But if you’re feeling under the weather, you probably should call up and ask to delay your spot. Especially if you can give the airfield at least a couple days notice, and they can find someone to fill your spot.

Skydiving is incredible, but it’s as crazy an experience for your body as it is for your mind. If you’re not quite feeling right – don’t be scared to delay your jump for another day.

I know. I know. This one’s a horrible image. But it needs to be mentioned.

If the worst happens, and you’re in the sky about to hurl, we need to figure out the best solution.

Unfortunately – having a sealable bag in your hands is as good as it gets. As funny as bombing the wildlife below may sound, you’ll get an equal amount all over yourself (and your instructor, if you’re doing a tandem!)

Almost everyone with motion sickness I know only experiences it as a passenger.

When you’re in control of the car / boat / magical flying duvet, your body seems to be able to handle the motion much better.

While it may sound scarier, jumping solo is a fantastic experience. I did my first jumps entirely solo, and I wouldn’t have it any other way! Check out our other articles for more on solo vs tandem skydiving.

You can also help feel more ‘in control’ by talking to your instructor. Which leads us on to our next section…

What To Do On The Day

Moving on from preparations, here’s some vital things you can do while at the airfield to prevent yourself from being labelled the Dropzone Defiler..

This is by far the most important tip on this page.

If you’re jumping with a tandem instructor, let them know you’re prone to motion sickness or worried that you may feel ill.

They may have experienced this before, and there’s a few ways they can help you, including:

Back to the less exciting tips.

If you’ve brought snacks with you, that’s half the battle. Between watching other skydivers and planes go up and down, chatting with friends, going through training, exploring the dropzone – it’s easy to forget to eat.

You also may be stuck waiting because of weather delays, which could leave you hungry.

To avoid an empty stomach, you gotta keep munching down those snacks. Even if you’re chalk-full of nerves and don’t feel at all hungry, it’s important to make sure you’re not flying (and falling) on an empty stomach.

As with food, it’s easy to forget to drink. Whatever you do, don’t get all wired up on energy drinks or soda – these things dehydrate you, and can make things worse.

Making sure you’re plenty hydrated will give your body the best chance at staying in control.

You might have noticed I’ve not mentioned motion sickness pills yet – that’s because it hasn’t been time to take them.

You want to take a pill only when you’re sure you’re about to board the plane.

Taking one when you’re 20/30 minutes out can go wrong if there’s a sudden weather delay. This can lead to hours of sitting around, and get complicated when it comes to whether or not to take another pill later on.

Try to take any Dimenhydrinate or other motion sickness medicine when you know for sure you’ll be flying soon.

This is also a great time to double-check any acupressure bands or other motion sickness tools you find useful.

Focus on Something in The Distance

I won’t talk about the jump itself, because trust me – motion sickness is the LAST thing that’ll be going through your mind as you’re falling through the sky.

When in the plane, and when under parachute, focusing on something in the distance can be a helpful tip. The horizon, a far-off mountain – anything that takes your focus away from what’s happening close up.

Communicate With Your Instructor

If you’ve pre-warned your instructor that you might become a barfcannon, they’re probably a little bit paranoid about getting their trousers wet.

If you’re able to, give them an update on how you’re doing, and whether they should be worried or not.

Don’t worry – they’ll be able to hear you clearly. It’s surprisingly quiet and peaceful once you’re under a parachute. Especially compared to the skydive!

If The Worst Happens

I just want to close out with a few tips I’ve gathered on dealing with any situations.

Here’s some quick tips if you feel like your lunch wants to check out the view:

Now, there’s a chance that any nausea sticks around (or even appears) after you land.

If this happens – don’t worry. You’re not alone.

This could just be the effect of all the adrenaline wearing off. Your body won’t have experience anything quite like what you just went through, so it might be a little shocked at what you just did!

It’ll pass with some time – just find somewhere to relax for a while, and maybe don’t go driving home just yet.

The good news is that most newbies who report feeling like this soon lose the feeling after a few more jumps. Consider that a hint 😉

Skydiving is an incredible experience, and I always feel privileged to live in a time when it’s so possible.

Nausea or motion sickness can be a bit of a wrench in the works, but it doesn’t have to spoil the whole day. I hope these tips have helped you feel more confident that you won’t vomit while on a jump. Or, if you do, that it’s far from the end of the world.

If this content has helped you, then check out the related articles below.