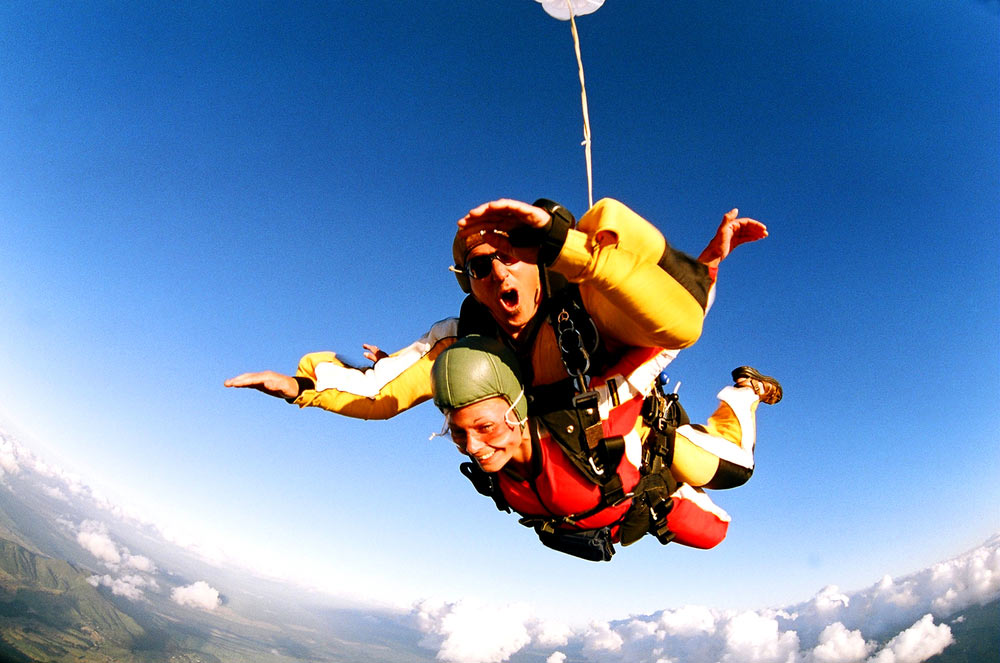 Anyone who’s ever fallen off a chair, been surprised by a bump in the road, or rode a crazy rollercoaster knows the feeling.

That sudden drop in your stomach – paired with a little burst of adrenaline as your body tries to figure out what the heck is going on!

One of the biggest fears with skydiving is getting that butterfly feeling. And not just for a few seconds, but for a minute straight.

Thankfully, you don’t get that ‘dropping feeling’ when skydiving. Since you’re jumping from a plane in flight, you’re already travelling at speed. The butterflies are caused by a sudden acceleration, which in this case is only a change in direction (travelling down, instead of along).

That’s the quick answer, but there’s much more to it than that.

As a skydiver who was once terrified of this feeling, I’ve fully researched why it does (and doesn’t) happen. Interested? Then let’s dive in.

What Causes That ‘Dropping Feeling’?

The usually explanation people have for the sudden butterflies when going over a road bump is the sudden ‘jump’ downwards.

This is only half-right.

The way to think of this is that it happens when you move faster than your stomach. Let me explain.

When you suddenly plummet in a rollercoaster, or fall from a chair, your body is rapidly accelerating downward from a static position. This happens so fast that everything inside you gets lets behind for a second.

It’s not that your stomach ‘drops’, is that the your body does – and your insides take a quick second to catch up!

This is similar to what is known as “negative g-forces” in physics.

Normal g-force is when you’re pressed into your seat – like in an accelerating or hard-turning car/rollercoaster. It’s the feeling of suddenly weighing 2-3x more than you usually do.

The butterfly feeling comes with negative g-forces. It’s the opposite to being pressed into your seat.

Right now if your chair was to suddenly rocket upwards –you’d be pushed down into it.

Instead, if it was to suddenly rocket downwards, you’d be left floating for a tiny moment, before following gravity’s call. That little bit of lag time from being static to accelerating downwards is what causes this feeling.

It’s almost like you’re entering zero-gravity for a second.

Especially in cases where you’re travelling upwards, like on a small road bump, and then the car suddenly goes downwards. You’re left in mid-air for a quick second. That tiny moment where you’re not being pulled by gravity is what causes this feeling.

Note – this same shift in momentum is also how they do zero-gravity flights.

Why Don’t We Get This Feeling While Skydiving?

So, bearing in mind that it’s the sudden acceleration downwards from a static position that causes it, why doesn’t it happen in a skydive?

We’re jumping straight down from a plane that’s flying horizontally, aren’t we?

Correct. However, it’s that momentum from already travelling forwards that counteracts this.

When the plane cuts the engine to allow you to jump, it’ll be flying at around 80-100mph. When you jump from the plane, you’ll rapidly decelerate horizontally while accelerating vertically. This roughly balances itself out.

If, instead, the plane was to quickly jump up then down, you’d get the feeling because the momentum suddenly shifts in opposite directions. Like when we go through a huge hit of turbulence in a standard passenger flight.

But because you’re transitioning from flying 100mph forward, to flying 100mph downward, that momentum is simply changing direction. You aren’t hit with a negative g-force which comes from a sudden shift.

What Does Cause You To Feel Butterflies?

And let me tell you, you seriously feel it when on a bungee jump!

Just like when you fall off a chair, you’re going from standing still to rapidly accelerating downward. This is as big of a butterfly feeling I’ve ever had.

I actually found bungee jumping way more scary because of this feeling. While skydiving felt relaxed and free (once over the fear), bungee jumping came with that terrifying feeling of falling. (That said, I’d still do it again!)

Any situation where you’re suddenly going from zero to full acceleration is when you’ll get that dropping feeling.

For example, skydiving from a static object will make you feel this like nothing else.

Jumping from a hot air balloon or a hovering helicopter comes with the full ‘oh my god I’m falling!’ package. Same goes for basejumping, or even high diving into a pool.

Ask any skydiver this question, and you’ll get the same response.

It’s hard to put into words.

I really let loose on this topic in my post about how it feels to go skydiving for the first time.

To sum that up:

There’s no butterflies in your stomach, no real sensation other than that of 120mph of wind hitting your whole body. To imagine what that feels like, picture sticking your head out the window on a motorway. Now double that, and put it over your whole body.

Once you get over the adrenaline and fear of skydiving, it really does feel so freeing. There’s no butterflies, and no feeling of falling. You’re just there, in the sky, with the whole world below you.

It’s a beautiful thing, which can feel like anything from a high-adrenaline buzz with friends to a serene, soul-cleansing experience which gives you so much appreciation for the world. It all depends on you, the skydiver!

Skydiving isn’t exactly a common thing to do, so there’s still a lot of vague-ness about different aspects of it.

In particular, the fear of that falling feeling can be a major stickler for why people are hesitant to sign up.

I hope this article – and my poor attempts at explaining physics – have helped explain why this sinking feeling doesn’t happen in a traditional skydive.

If this content’s helped you, please consider checking out the related articles below!