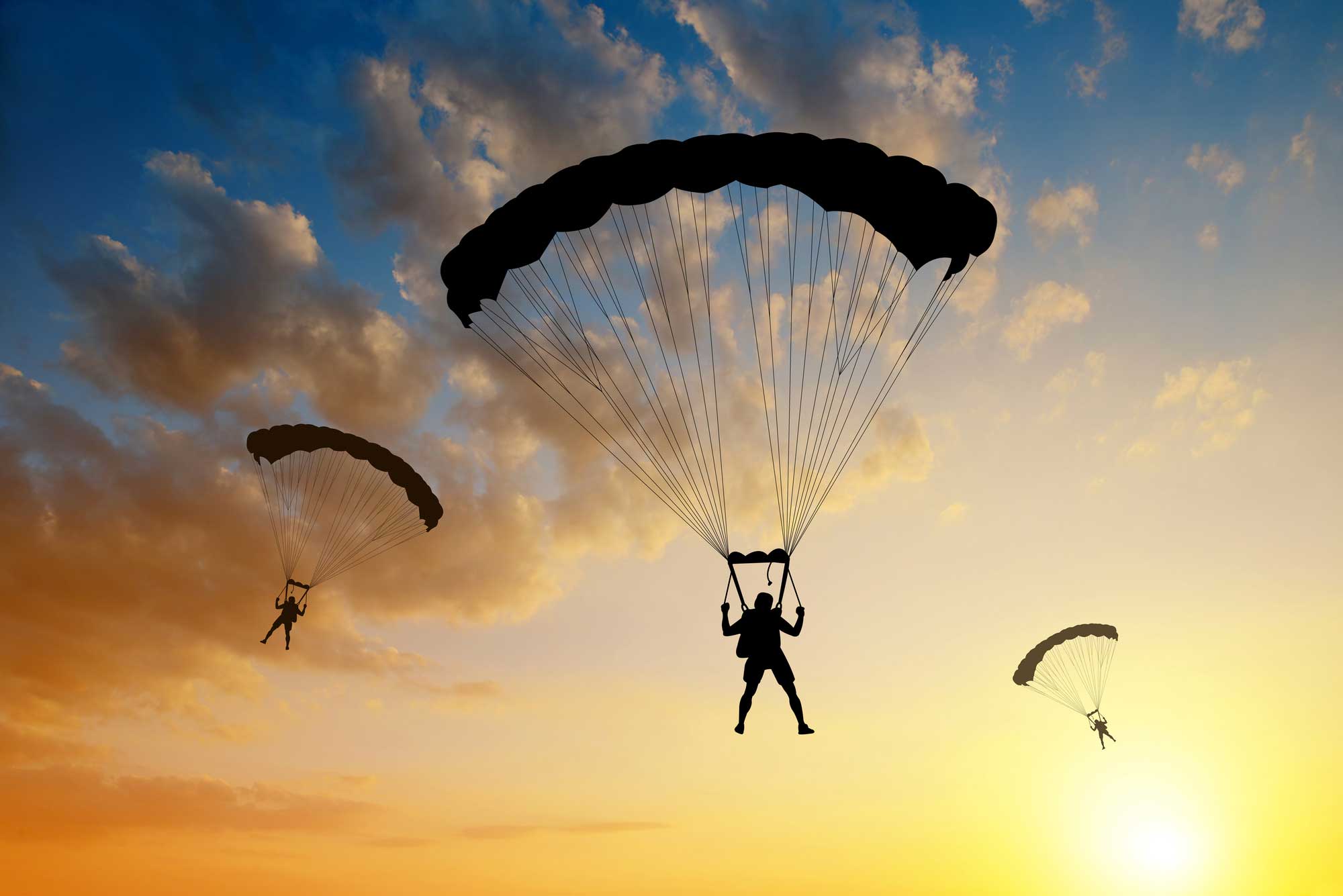 They’re so uncommon, and there’s so many of them, that they generally all get lumped into one basket. The ‘that’s what crazy people do’ basket.

One common comparison is between parachuting and skydiving. What’s the difference? Aren’t they both the same thing? Surely you can’t parachute without skydiving first?

In this guide I’ll quickly walk through what both these things are, and then how they compare. Afterwards, I’ll let you know which is better!

If that sounds good, let’s dive in.

Many people would describe parachuting as what happens after a skydive.

Parachuting is the act of gliding through the air underneath a canopy. This can be anything from a lovely ride under a large canopy, to testing out your king-sized bed sheet’s aerial capabilities.

Parachuting isn’t a sport itself, but it’s a part of many. Parachuting is often what happens after we’ve done something in the sky, and need to get back to ground.

Parachuting is involved in Skydiving, BASE Jumping, Paragliding (a different form of canopy), and any other sky-based sports.

Parachuting As An Activity

If you ask me, doing what’s called a ‘static-line skydive’ may as well be called parachuting.

This is where a student skydiver jumps out the plane with a cord which immediately pulls their parachute. This means they’re only falling for a quick second before their canopy is deployed and above their heads.

In this way, you could argue that static line skydiving IS purely parachuting. From the moment you leave the plane to the moment your feet touch the ground – you’re under a parachute.

Another parachute-focused sport is paragliding. This is where you use a much larger and more parabolic canopy to stay in the air for longer – even being able to ride upwards if you catch the right air currents.

Depending on who you ask, this is another pure form of parachuting. You often start by simply running down a steep hill with the canopy already above you.

Just as the name implies, skydiving is the act of diving – or falling – through the sky unaided.

Normally started from a plane, this amazing experience can last for up to 90 seconds at standard altitudes. There’s about a thousand different things you can do during a skydive (including freestyling, formation jumping, surfing, wingsuiting, throwing weighted balls around, etc) – but parachuting is not one of them.

Parachuting is what happens after a skydive ends (which is why I argue a static line ‘skydive’ is less of a skydive and more of a parachute experience).

Which Is Better – Skydiving vs Parachuting

Let me first caveat this by saying both of these activities are incredible.

Skydiving is an ultimate thrill. You’re flying through the air, doing flips, tricks, and messing around with your friends. The whole world is below you – and you’re not attached to anything with an engine. It’s a magical experience that will never fail to put a huge smile on your face

Parachuting can be serene. While some skydivers find it boring, most find parachuting to also be a fantastic part of a skydive. After all the nerves, the adrenaline, the noise of the plane, the rush of the wind… it’s quiet.

There’s just you and your canopy, with the world below you. No noise other than the gentle flap of the air passing through your chute, and maybe the plane far off in the distance. It’s incredible peaceful, and it lets you truly take in the view. I’d even hesitate to call it a view – since you’re not just looking at it, you’re in it!

Different people like different things. If you love an adrenaline rush and are always seeking a thrill, skydiving will hands down become your favorite thing in the world. If you’re more spiritual and like to take things easy, then being under parachute may become the best part of a skydiving for you.

Personally, it honestly depends on the day. I love skydiving and the feeling you get with it. But as I write this right now, I incredibly miss that feeling of when your parachute opens, all the noise disappears, and you’re sitting in the sky full of smiles and relief.

I hope this quick little article has helped clear up any confusion you might have had around skydiving and parachuting!

Again – skydiving is a full sport in itself. Parachuting is a part of skydiving, as well as of many other sky based sports.

Both are incredible, and are sort of too different to compare. All I can say is that you should try both and see how you find them 😉

Thanks for reading, and happy jumping!