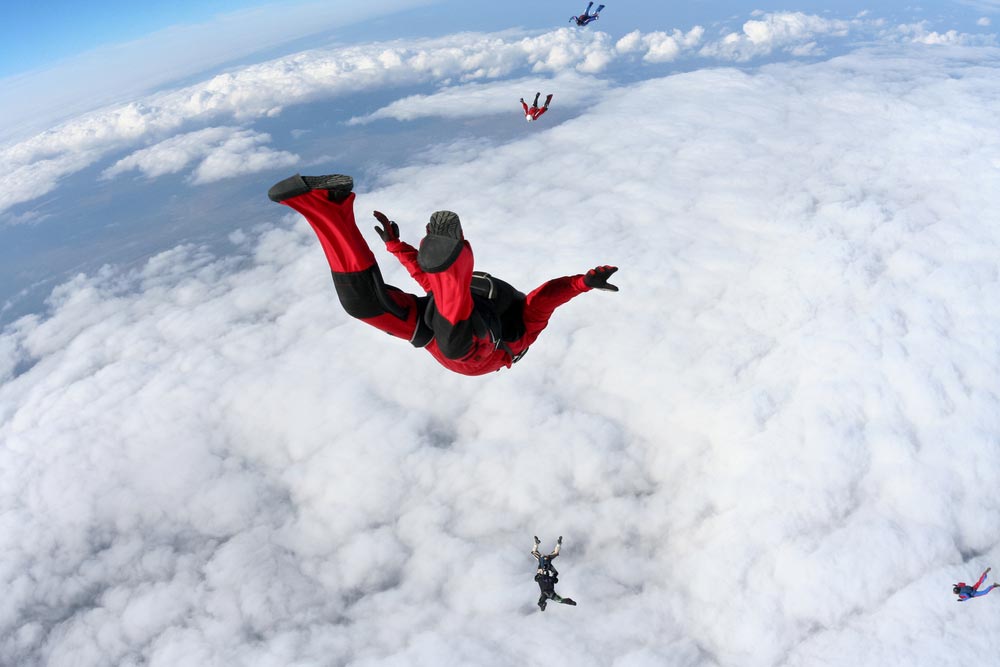 When an object is falling through the sky, it accelerates until it reaches a terminal velocity.

A maximum speed before air resistance balances out the pull of gravity.

When it comes to skydiving, the standard terminal velocity is 120mph (193km/h). This is the average speed for a solo jumper falling in a stable position. However, that’s not the full story. Your skydiving speed changes depending on your body position and your weight.

While this sounds like a simple question, there’s a lot more to it. Out of curiosity I dove into the research, and below is everything I found about the speed you go while skydiving.

But if you want the simple answer…

As skydivers, we say that ‘your terminal velocity will be 120mph’ similar to how we say a car would travel at 70mph. The real answer is that it depends!

At the risk of giving you math class flashbacks, here’s the equation for terminal velocity (maximum fall speed):

As you can see, two huge factors are your mass (m) and your body position (the drag coefficient, Cd).

If you stretch yourself out as flat as you can – like in an arch – then more of you will be in contact with the air. This increases your air resistance, slowing you down. The clothes you wear also affect your skydiving speed.

Alternatively, if you were to stand straight like a pencil and fall feet first, you’d massively accelerate! Since there’s so little of you punching through the air.

Put simply, the heavier an object is, the faster it’s terminal velocity will be.

I don’t say this to put anyone on the heavy side on edge.

Instead, the real difference is when you have a tandem skydive – two people strapped together. Now that’s when we see a really big mass increase!

With those covered, I can now tell you the speed you’ll be falling depending on your situation.

This is the standard case.

In almost all skydives, we’re taught to fall like this:

Arch positions are how we slow our speed.

By adopting an arch, we slow our fall speed and remain in control. The arch turns us into a steering wheel – a little turn of the arms is how we can control our direction.

For almost all solo skydivers falling in this position, their speed will max out around 120mph (193km/h).

Remember what I said about mass and fall speed?

This is where that kicks in.

When you strap two people together, you double the mass of the object falling through the sky.

Double the fun, but double the mass!

This doesn’t mean that the fall speed is doubled, but it’s definitely increased.

It’s worth noting that the larger your instructor, the faster you fall!

For this reason, tandem jumps involve the use of a trailing pilot chute, called a drogue chute.

As you fall, a miniature parachute is let out to give you guys some added air resistance and stability as you fall.

Thanks to these pilot chutes a tandem skydive’s fall speed is reduced to a similar terminal velocity of around 120mph.

I touched on how your maximum fall speed is influenced by your mass, and the amount of you that’s in contact with the air.

This is where we get into the first change in skydiving position – sitting!

Sitting in the sky not only makes you fall faster, but also makes you 2-3x cooler.

Now, this isn’t as easy as it looks. It’s actually quite an advanced position.

When you’re falling, you control your movement by how the air passes around you. If you’re not symmetrical, you’ll start to spin as more air pushes against one side of you.

That’s why we’re taught to arch. It’s the easiest way to keep a wide, symmetrical position as you fall.

When we transition into a seated position, you need to keep that symmetry and control while in quite a contorted position. Instead of being a ‘relaxed seat’, it’s more of a controlled movement.

Adopting a sitting position will increase your fall speed by around 10-20%; to around 140mph.

You might have guessed that’s not the fastest. There’s one more level to go…

Remember that image of falling like a pencil? Well, this is that technique.

Head-down skydiving is the fastest way we have of falling. By becoming a dot in the sky (instead of an arch), you drop almost all air resistance and rocket downwards.

The best position when you want to land quickly and tell everyone how awesome you are.

This position is especially hard to keep balance, as anything out of symmetry can put you into a spin. The much-increased speed also makes your margin of error much smaller, since the air force is much more powerful.

Skydiving head-down will typically increase your top-speed all the way up to 180mph.

Why is the word typically underlined? Good question. It’s because we’re entering the world of Speed Skydiving.

People will get competitive with just about anything.

That’s right – among various other competitions in skydiving (like landing on a target or formation skydiving), there’s championships about how fast you can fall.

Wondering what that looks like? Well, here’s one of those record-level jumps:

What Altitude Are You At?

This is where we really start to get into physics.

Your fall speed is slowed thanks to air resistance, right?

Well what if you had lighter air?

When Felix Baumgartner broke the record for the highest ever jump height, he also blew past the speed skydiving record.

Baumgartner jumped from an incredible 128,000ft up. That’s about 24 miles. Straight up.

Thanks to the lower atmosphere at that height, there is much less air resistance.

Which meant that Baumgartner hurtled back down at a peak of 844mph (1,358km/h). He was flying faster than the speed of sound – almost 80 miles faster in fact (768mph).

Here that is in all it’s glory:

How Fast Do You Fall Under Parachute?

Whew, what a day it’s been. We’ve skydived solo, tandem, sitting, head down, and looked at speed records!

After all this craziness, our journey under canopy is much more of a controlled descent.

You fall at only a couple of miles per hour downwards. When you land, it’s more like you’ve jumped from a small height than anywhere higher up. In fact – when you get your landing just right, and in good conditions – it can feel like you’ve just jumped up and down. Easy.

That being said, there’s a lot of factors that influence your falling speed under canopy.

The main one is your weight. Believe me, there’s a big difference in watching a 200lb guy glide in to land versus a 100lb girl floating in the sky for ages. When someone super light skydives solo, they often wear weight vests to make sure they don’t fly away!

The second major factor is the size of your canopy. As jumpers grow in experience and confidence, they downsize to smaller canopies for quicker descents (and more fun).

The biggest speed issue under canopy is your flying speed.

Without any wind, we glide along at around 15mph. (Don’t worry, we can ‘flare’ the canopy to apply the breaks and slow us down for landing).

When the wind is around, though, it can add (or remove) to your flying speed.

In strong winds, we can actually end up stationary, or even flying backwards!

All of this will be taught to you in a solo course, or handled by your tandem. So don’t worry about it. Wind is the biggest factor when we’re jumping – and for this reason – so your dropzone won’t let you fly if the gusts are above your paygrade.

Ask any skydiver about ‘what speed do you fall at’, and they’ll say 120mph.

But that’s not always true – and that’s what I’ve really tried to cover in this quick guide.

I hope I’ve managed to fully answer this question for you, as well as let you know a little more about skydiving speeds in general.

If this has helped you out, please consider checking out the related articles below!

Thanks for reading, and have a great day 🙂