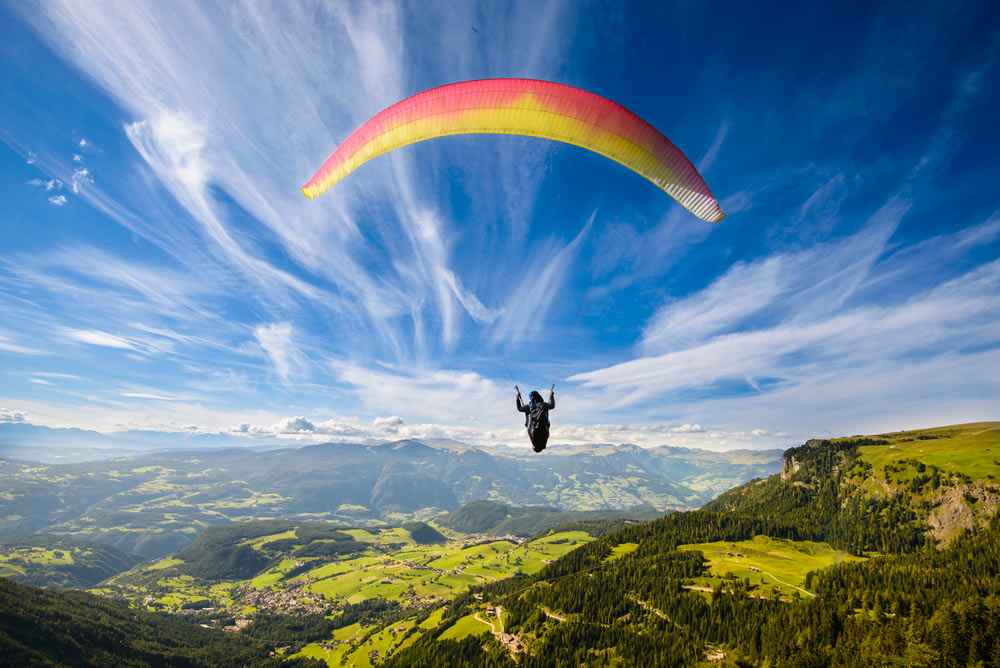 Sailing through the sky is amazing – but is it better to do it downwards, or horizontally?

Such is the question we face today! Two of the most popular ‘sky’ sports are skydiving and paragliding. While similar, they also have plenty of differences.

That’s just the short version, though.

For those curious about the differences, you’ll learn every difference between them in the quick guide below.

If that sounds good, then let’s dive in!

This question incites a lot of emotion in me, because skydiving is SUCH an experience.

If you’d like the long version, check out my post on how skydiving for the first time feels.

In short, there’s no butterflies. Instead, skydiving is almost like flying – except with 120mph worth of wind blasting up at you. It’s the best views, the most adrenaline, the most exciting and most serene all at the same time.

The canopy ride is a totally separate experience, too. After all the wind and chaos, being under canopy is entirely quiet and peaceful. You’re just gently gliding back down to earth, and enjoying all the views along the way.

Contrary to Skydiving, paragliding is more of a peaceful art than an adrenaline-filled rollercoaster.

While take off can be scary, once you’re sailing in the sky it’s much more relaxing. The harness let’s you settle in to a more comfortable position, as you pilot the canopy throughout the hills or cliffs you’re flying around.

Unlike skydiving, paragliding isn’t a quick one-and-done experience. You can be ‘sailing’ through the sky for ages, quickly racking up the flight miles! It’s more of a chill game of piloting through obstacles and updrafts, rather than one mental rush downwards.

Okay – so that’s the ‘experience’ side very lightly covered. Let’s get stuck in to the real differences.

Obviously, skydiving and paragliding have a lot in common. They’re 2 of the only sports enjoyed under a canopy in the sky, and ways for us ground-bound humans to experience flight without the aid of a large and noisy engine.

Paragliders are also often skydivers too! Many paragliders start off skydiving, and end up trying out paragliding because it can be done on a windier day – and without needing a running airfield. If there’s too much wind or the airfield’s too busy, paragliding is a great way to still get into the sky.

Anyway – here’s the differences between the two sports lined up one by one.

While both of these sports are based around flight, their goals are what truly separates them.

Skydiving is about enjoying the biggest freefall you can. It’s pure adrenaline rush, pure freedom, pure escape. You hurtle through the sky, flying, diving, flipping, and connecting with other jumpers – before pulling your chute and gliding down to the ground.

Paragliding is about enjoying the biggest flight you can. It’s simpler, more independent, and more calm than skydiving. It’s about enjoying the sky and flying with nature, rather than dropping like a rock. You need no plane or engine to get your flight started.

In the end, both of these sports are totally unique – but it’s their main goal that separates the experience you get with each.

Post skydive, the main goal is to land quickly in order to skydive again!

Skydivers jump using what’s called a ‘square’ canopy (it’s really more of a rectangle). These will always glide downwards, at a faster rate depending on it’s size and your weight. Typically, jumpers ‘downsize’ their parachutes to get down faster, even spinning their canopy in the air to pick up downward speed.

On the other hand, paragliders use a much more curved canopy – shaped like an upside-down parabola. It’s much bigger than a skydivers canopy, and built to stay in the air as much as possible. Not only that, but to be much more maneuverable and able to ride gusts of wind back upwards.

After such a huge experience, the post-skydive canopy ride can go by in a flash. Especially for jumpers who have downsized, it can take less than 5 minutes to go from opening their chute to landing. (Student parachutes are more like 20 minutes).

The point of a skydiving canopy flight isn’t to travel anywhere, but to essentially circle the airfield and line up your landing spot.

Alternatively, paragliding flights can last hundreds of kilometers! A skilled pilot can truly ride the wind to enjoy hours under their canopy, all without an engine. That being said, they should still have an landing location goal with intended flight paths to ensure a smooth landing.

Their parachutes then slow them down to about 5mph in under 5 seconds.

Imagine speeding at 120mph in your car, then braking hard to 5mph in just a few seconds. Even the fastest cars in the world don’t have the brakes for that!

That should give you an idea of what your skydiving harness has to be built for. These things aren’t build for comfort, they’re built to take the force your canopy applies when it opens at full speed. It’s safe to say that skydiving harnesses are NOT the most comfortable thing in the world! At best their slightly uncomfortable, and at worst you’re begging to get back to the ground faster.

On the other hand, paragliding harnesses are made for comfort. You never accelerate more than a gliding speed under a paraglider, so the forces are much smaller. That means the harness can provide more support to the rest of your body, and allow you to relax into it much more.

While both these sports are super safe, we obviously need to have reserve parachutes available.

In skydiving, a reserve is essentially the same parachute as your main one. Except it’s been packed diligently by a certified expert, and not hurriedly by you as you rush to get into the next plane! Otherwise your reserve parachute is just the same as your main one (but often in white).

Paragliding reserves are round canopies, almost straight out of the World War 2 movies where you see thousands of soldiers flying in using them. They offer little in the way of control, and are there to get you back to the ground alive.

Thankfully it’s incredibly rare to need either of these, but they’re always there if we need them.

A good analogy with this point is that paragliding is like running, while skydiving is like driving.

Just like in running, paragliders can only really do one thing – paragliding. While you can always become a ‘better’ paraglider or runner, there’s no advanced variations of the sport. Sure you can do some great maneuvers (or get faster), but in the end paragliding is simply paragliding. (That’s not to say it’s not amazing and so serene).

Skydiving is just the same. Once you’ve mastered skydiving basics, there’s a whole world of opportunities you can explore. Including:

Just to name a few!

So while paragliding itself is incredible, it’s not a gateway to more advanced forms of flight like skydiving is.

Planning a skydive is very different to planning a paraglide.

Skydiving relies on “drop zones” which are already set-up for you. As long as there’s space on the day and the weather’s good, you can turn up and enjoy a jump.

On the other hand, paragliding is much more of an individual sport. It’s you, plus maybe a friend or two, and your paragliding equipment. It’s up to you where you’ll go, what you’ll do, how you’ll work around the weather, where you’ll land, and what your emergency procedures are.

All of that responsibility can be frightening to some, but it heavily attracts others. Paragliding can be done entirely solo – you don’t even need a car, phone, or anything electrical (outside of safety equipment).

The Similarities Between Skydiving & Paragliding

After going through so many differences between these two sports, I also wanted to highlight where they’re similar.

Many skydivers are also paragliders and vice versa. Both of these sports are so unique and attract incredible people, who tend to be positive, optimistic, and happy to be getting into the sky.

The communities you’ll find around a drop zone or a paragliding club are very similar. Between the comradery, the desire to share knowledge and help one another learn, to the shared goals and dreams of conquering X achievement in the sport.

Both groups are incredible welcoming, and are one of the underrated highlights of the sports.

While flying a plane is incredible, there’s nothing like sitting in the sky alone. Just you and your parachute, with the whole world beneath you.

That same serene experience can be enjoyed through both skydiving and paragliding. I can’t describe how beautiful and peaceful the world seems when you’re up there in the sky, on your own.

If you’ve ever been through turbulence on a plane, then you can imagine what turbulence under a canopy is like.

Both of these sports are incredible safe, but only in good weather. These are not sports for an ice-cold and windy winter day (though some do still try). Skydivers and paragliders most used app on their phones isn’t Facebook or Instagram, it’s usually an advanced wind and weather app for planning their next flight!

Is Paragliding More Dangerous Than Skydiving?

I’ve included this question because I see this being asked on forums, and I want to address it.

While both sports have their risk (anything involving flight does), both of these sports are incredibly safe. By far, the most danger you’ll be in when taking part in either of these sports, is on your drive to the drop zone or launch point.

In my opinion, it doesn’t make sense to argue whether paragliding is more dangerous than skydiving. Doing so implies that one or the other isn’t entirely safe. Instead, we should focus on how safe they both are – especially when done responsibly and following all recommended advice (accidents typically happen by veterans who push the limits on the sports).

When it comes down to it – skydiving and paragliding are the same thing: incredible!

It’s an absolute privilege to take part in either of these sports, and enjoy the world from a quiet, serene canopy (or when hurtling towards it at terminal velocity).

I hope this article has helped clear up the differences between the two sports, and given you a few insights into what both skydiving and paragliding are like.

If you’re looking to plan your first experience in either, be sure to check out the related articles below.

Thanks for reading, and happy flying!