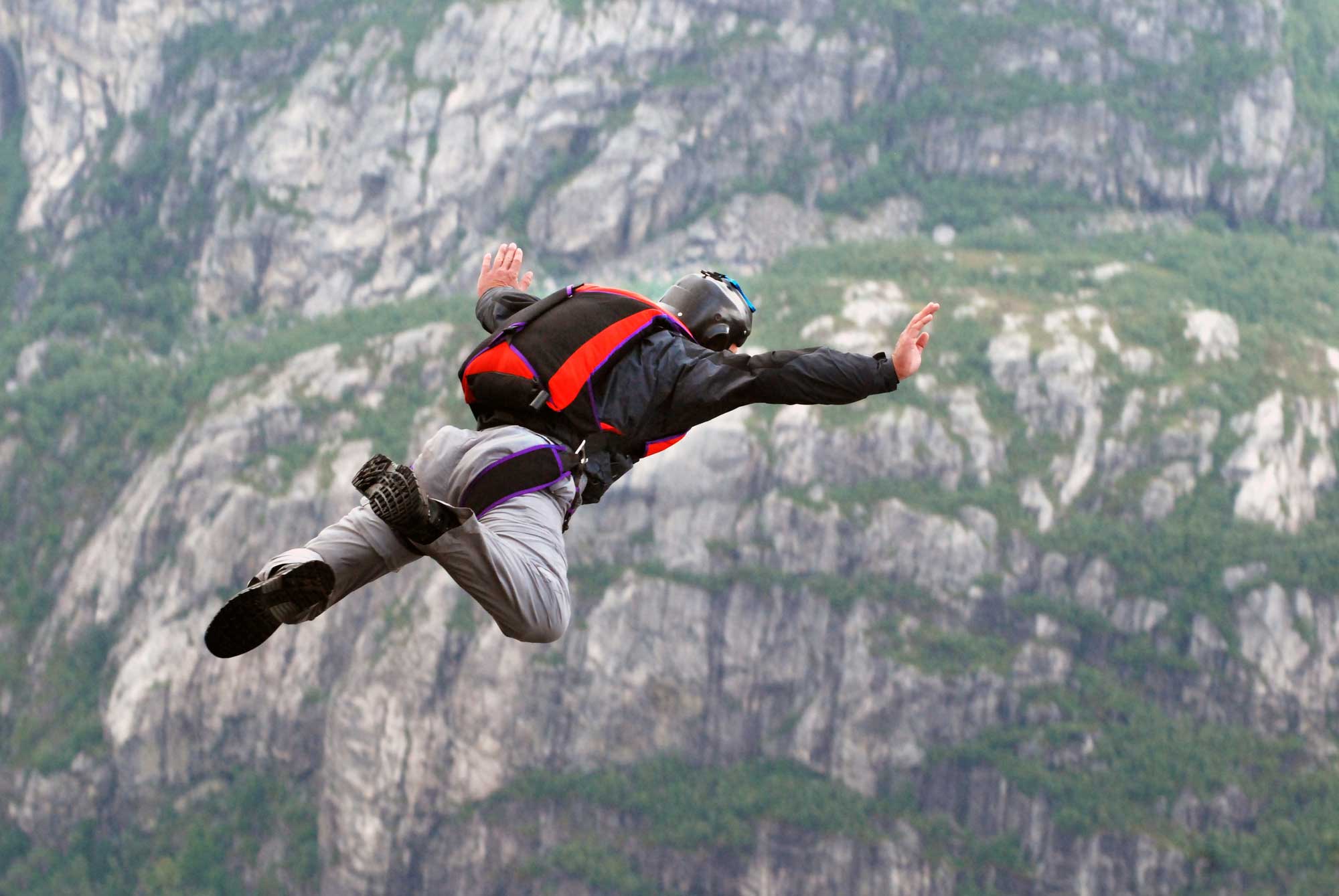 If you tell any jumper that skydiving’s unsafe, you’ll usually get the same answer.

They’ll disagree. Probably arguing back with safety facts and figures, outlining how the most dangerous part of a skydive is the drive to the airfield.

But if you tell a BASE jumper that BASE jumping is unsafe?

They’ll just laugh and agree with you!

BASE jumping and skydiving are very similar, but also incredibly different sports. They’re often lumped into the same basket by those unfamiliar with them.

In this quick guide I’ll fully explain how they differ – and what that means.

Disclaimer: I’m a skydiver, not a BASE jumper. That said, I’ve watched countless hours of base jumping and know a whole ton about the sport. I’m just also wary about it’s fatality statistics!

Skydiving needs no explanation. You’ve got planes flying through the sky dropping out humans for fun. The sport has a huge history and is super regulated – with safety codes and rules covering every part of the sport. Each skydiver has two parachutes and a TON of altitude to work with (in aviation, altitude means safety).

Skydiving offers complete freedom as you dance through the sky.

The craziest of the crazy. BASE means that you’re jumping from one of:

Base jumping is more like the wild west. There’s best practices, but there’s no laws or regulations. You’re truly taking your own life in your own hands when you base jump. Base jumpers only have one parachute. There’s not enough altitude to try and open a second one. If the first one fails, you’re probably dead.

BASE jumping offers complete adrenaline – you’re truly putting everything on the line.

Skydiving vs Base Jumping: Comparisons

Alright, so from those short introductions alone you can probably see the huge differences in the sports. However, it’s important to understand the detail behind those differences. What they truly mean in terms of gear, risk, locations, and communities.

I’ll compare each difference one at a time. Let’s start with the biggest.

Skydiving has what I call a ‘false-reputation’ when it comes to safety. The sport appears super dangerous, but it’s very safe. The risk of a fatality in skydiving (1 in 100,000 jumps) is roughly equal to the risk of driving 500 miles (driving fatality risk is 1.7 in 100,000,000 miles), or about a day of driving.

While some skydivers say that driving is more dangerous than skydiving, I’d argue they’re roughly equal. I’ll be doing a much bigger breakdown on skydiving safety here in the future.

BASE jumping, however, has a fatality rate of 1 in 2,300 jumps. That’s almost 50x more dangerous than skydiving.

You’d need to drive about 25,000 miles to get the same fatality risk from driving as one BASE jump!

I hope those stats make it obvious enough. Base jumping is around 50x the danger level of a skydive.

Here’s another way to put it:

Before you even consider getting into BASE, it’s highly recommended (by base jumpers themselves) to check out the base jumping fatality statistics. Even more important is the fatality list. They have the story and accounts of almost every base jumper. Try reading a few, while thinking about the people who would miss you most.

Okay – enough statistics! Let’s look at how these two sports compare in a jump.

In aviation, altitude is safety. The higher you are, the more time you have to deal with a problem.

As they say in skydiving – if something goes wrong, don’t worry! You have the rest of your life to figure it out.

The glaring danger with base jumping is that you have almost zero altitude. Jumps are often made from as low as 150ft, giving you just a few seconds to work with. If something goes wrong, you probably have about a second to fix the entire problem before you kiss the ground.

Around 38% of base jumping deaths occur without a parachute being pulled. This is often because of a missed grab or bad flip, and the jumper not getting to their handle in time.

One of the key differences between skydiving and base jumping is your level of control.

Skydivers will almost always reach a terminal velocity of 120mph. This gives them a ton of airflow at a constant speed, which makes controlling their position and movement easier.

On the other hand, base jumpers need to pull their chute almost immediately. This means they need to jump and pull while gaining speed – the airflow can be quite uneven. This makes controlling your position much harder.

Combine that with all the flips and tricks base jumpers love to do, and you massively multiply the chance of a malfunction or an entanglement. All combined with zero altitude to work with.

Sometimes your parachute might not open exactly how you want it to. It might open up at a weird angle, or even backwards (off-heading openings). This means you’re going to be swung round to fly whatever direction the canopy opens, until you correct the heading.

In skydiving, this an off-heading opening is totally fine. You’re surrounded by nothing but air, so no worries!

Base jumping has a huge issue with this because of the hazards around you. Many, many jumpers meet their end because of an off-heading opening that sends them smack into the cliff, building, or antenna that they just jumped from.

Skydivers run with a full rig setup. They’ve got a lot of kit to help make sure they land safely – including:

On the other hand, base jumpers have:

Everything relies on that canopy having a good opening with plenty of altitude to spare.

Okay, so let’s say you’ve gone base jumping. You’ve jumped, kept stable, pulled your chute, and it’s opened well. Now – where are you going to land?

If you were skydiving, you’d have a paradise awaiting you. A flat, level airfield with a concrete runway or cut grass to touch your beautiful feet down on.

Base jumpers, however? Good luck finding anything that doesn’t have boulders, rocks, or other debris. Let alone near roads, small buildings, and telephone wires (super hard to see from above).

The ‘jumping’ part of base jumping isn’t where the danger ends – it’s where it begins. Bad landings can quickly put you in the back of an ambulance. Once they somehow get to wherever you are.

From a birds-eye view, these two sports are clearly separated by their regulations.

While one is super regulated – with rules and regulations almost every step of the way – the other is more of a cowboy sport. Aside from very rare spots, you typically learn base jumping by doing it with your friends. It’s less of a “here’s manuals and certifications” and more of “my mate Billy says to do this instead of that”.

Similarly with the amount of training you do, skydivers must complete at least a day’s training before they can get in the plane. Either that, or be strapped to an extremely experienced tandem instructor.

Base jumpers just need to have a parachute and a huge pair of cojones! There are some rare BASE jump schools out there, though. Like LTBJ based in Croatia – their first requirement is that you’ve done at least 200 skydives to apply.

With the above said, most base jumpers do put in a ton of time and effort to practice and prepare before they go. It’s just that there’s a few cowboys out there who go with nothing but an ego and a parachute.

Even the most relaxed base jump needs a lot of forward planning. It’s on you to scout the location, find the exit point, the landing point, and make sure the weather’s going to be suitable to you. This is most true when it comes to buildings – there’s not many who are happy to have you risk your life on them! This is where base jumping starts to coincide with trespassing, with building access being planned more rigorously than in Ocean’s Eleven.

Alright – so that’s about every category I can think of!

I hope this guide has helped shine a light on the real differences between skydiving and BASE Jumping.

Overall, I’d say that skydiving will never match the total thrill of BASE jumping. However, the sheer statistical risk (rightfully) puts off many jumpers. Those that do it seem to feel it’s more of a calling, something that goes beyond a choice. That they have to do. I guess that’s how you get past the risk of the most dangerous sport in the world. It’s like the hard drug of extreme sports!

That said, skydiving is absolutely incredible. There’s nothing like flying through the sky with nothing but you, a parachute, and maybe a few friends.

If you’d like to learn more about skydiving, check out the related posts below!

Thanks for reading, and happy jumping.