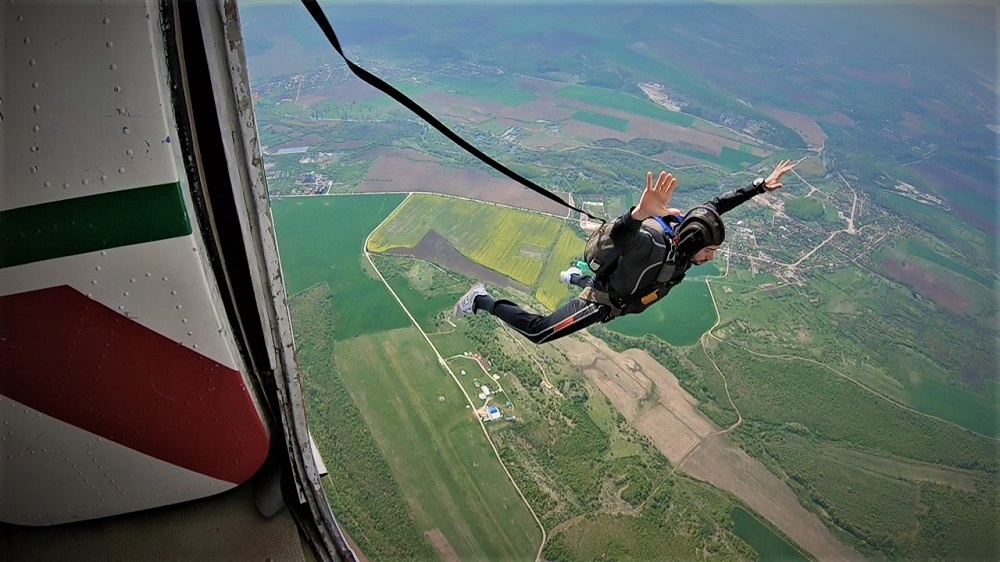 There are two ways to become a licensed skydiver.

One is Static Line, the other is Accelerated Free Fall (AFF).

I know a lot of beginners might be wondering which is better, and which they should go for – so I’ve put this comparison together to help.

There’s a lot more to it than that, though.

Read on for the full comparison between these two routes to your license.

To help any proper newbies out there, I’ll first introduce both of these options. If you’re already familiar with both, then skip on to the comparison.

One note: the USPA requires at least 25 jumps to be made before you can get your license. Both of these training methods are only there to get you started – you keep jumping until you hit 25 once you’re done.

Static Line is the original way to learn skydiving. If you’ve ever seen any World War 2 footage or TV (HUGE shoutout to the Band of Brothers series) this is the same method they used to skydive.

You’re attached via a ‘static line’ – which is basically a rope – to the plane. When you gracefully jump out of the plane, the rope pulls your parachute open. Before you know it you’re sitting under canopy in the sky!

It’s a very simple learning method. The simplicity means you don’t need the instructor to jump out with you, only be in the plane. This means one instructor can run a whole group of students, which helps to keep the costs low.

Static Line then follows a step-by-step progression system – which I’ve covered fully in this guide to static line skydiving.

AFF is exactly what it says on the tin – an accelerated route to freefall! You get private training from an instructor, who then jumps out of the plane with you and one more instructor at an altitude of 10,000ft.

AFF is sort of like having your own skydiving chauffeurs. Your first few jumps are with instructors flying down right next to you, and helping you find your balance. It’s this added instructor time that drives the cost of AFF up so much.

Then there’s only 7 different learning jumps for AFF before you’re left to freefall on your own.

Alright, let’s dive in to the full comparison.

I’ll walk through the various aspects that differ between these two courses one by one. Think about what aspects are more important to you, and see how the two options compare on those.

To give a ‘birds-eye view’ of these two, here’s the basic stats to compare them with.

Both static line and AFF need a sizeable amount of training. This is typically done in one day, with the first jump made on the following day.

Static Line is a little easier, because your first jump is simpler. Instead, the additional training of static line is spread out between all the progression jumps. Each progression includes a 10-15 minute brief with your instructor on the next part.

Accelerated Free Fall needs more initial training because there’s WAY more going in to that first jump. You’re freefalling at terminal velocity and pulling your own chute from the get-go. However, there’s less training afterwards because of less subsequent jumps.

Winner: Personally I prefer static line slowly adding layers onto an easier initial training, rather than a flood of information up-front.

Your first jump on a static line is fantastic, but short lived. By the time you’re out of the plane, you’re under parachute! It’s not until jump 8 or so that you even hit terminal velocity.

AFF lets a newbie fully experience the whole realm of skydiving from a 10,000ft drop – right from the first go. It’s an amazing feat, though it can be a little overwhelming!

We’ve established that both routes need a total of 25 jumps before you can shoot for an A License. However, both have differing amounts of training.

Static Line has a slow and steady progression system of around 17 jumps. These see you slowly progress from static line, to initial freefall, to mastering maneuvers.

On the other hand, AFF only has around 7 training jumps. Since you’re right in at the deep end, you need much less progression before you’re capable of handling yourself fully.

That said, AFF has been considered to produce worse skydivers. In particular – their canopy handling. Since Static Line has so many training jumps, with plenty that are almost entirely under canopy, the instructors can focus much more on teaching canopy handling in the beginning.

AFF rushes past much of this, because the focus is much more on figuring out how to freefall properly and sweeping any canopy issues under the carpet. AFF students will still catch up on the basics with more jumps later on.

Despite having 10 training levels more than AFF, a full Static Line course will often cost around $1,000 less! This is simply because your initial training is in a group, and you don’t need so much instructor time or focus as you progress.

For some this may not make much of a difference, but for younger people – students especially – this can make a huge difference.

This isn’t a science, so let’s talk about fun!

AFF is by far the most fun for the first dozen jumps. You’re instantly skydiving from a full altitude, and you can be a little more carefree since you have instructors by your side. Their private focus means you’ll get must more efficient tutoring, too.

On the other hand, Static Line skydiving is a fair bit slower. One nice side effect is that you can go as a whole group of friends, and learn together – while AFF needs more private instructor time privately or in small groups.

So Which Is Better?

Summing up everything, I can only say that no course is better overall.

Instead – we should look at this in terms of priorities.

If you prioritise budget and learning, I’d opt for static line. It’s a much slower progression system that comes out to be much cheaper. The first skydive is still an amazing experience – despite not including much freefall – and you’ll get to the big jumps before you know it.

If you prioritize fun and saving time, shoot for AFF. You jump right in to the deep end (literally) and have much more instructor attention, meaning you learn super quick. It might not be as all-rounded as static line, but you can always continue to learn on your own after getting through the training jumps.

Whatever the case – make sure to set aside the time for your course! Unfortunately, you can’t do the first couple of jumps now, and the rest in 3 months. You typically have a 30 day maximum time limit between jumps as a student, or else you need to do a training refresher. So whatever the option, make sure you’ve got plenty of time and the budget to cover your course choice.

I hope this quick comparison has helped shine a light on the differences between these two courses for you.

Whatever your choice, I can guarantee you’re going to have an absolute blast. At the end of the day, both starting points lead to the same end destination. By the time you’ve got your license, it won’t matter how you got there.

If this article helped you then please consider checking out the related ones below!

Thanks for reading, and happy jumping.