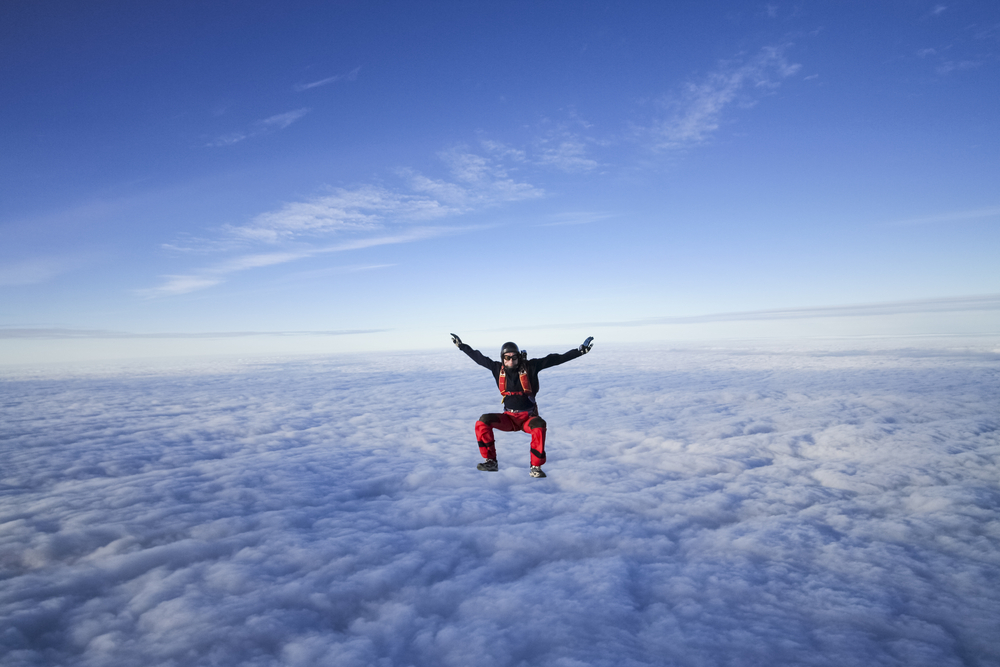 One of the most common misconceptions about skydiving is that you HAVE to start with someone on your back.

Personally, I’ve never had a skydiving instructor attached or holding onto me, but it was my 7th solo jump that I truly consider my first skydive.

The 2 Ways of Learning to Skydive Solo

No matter where you go in the world, solo skydiving is taught in one of either two courses:

I’ve got a detailed comparison between these two here.

The type of course you decide to do will hold different experiences for you. In my opinion, ‘solo skydiving’ isn’t just leaving the plane on your own.

I would define a solo skydive as when you:

Let’s look at how far along each training course you need to be before you truly skydive solo.

In AFF, you start right at the highest altitude. The idea is that your first jumps are done with your instructors jumping with you and holding on to you on either side (NOT fully attached like in a tandem jump).

4 jumps until getting your first solo skydive isn’t bad at all! From there, AFF quickly progresses into maneuvers and building up more jump confidence.

Now let’s take a look at the more old-school option.

This method takes a very different approach – you jump entirely alone from the start, but with your parachute cord attached to the plane. This opens your parachute immediately, but removes any chance of freefall.

If you check back to the ‘requirements’ for a solo skydive above, it takes until the 8th static line jump before I’d consider it a true solo skydive. At least that’s my own experience.

After the 10 second delay comes the 15 second one, and that’s even more intense! Though I’d still consider Jump 8 as ‘ticking the box’ for a solo skydive.

I hope this super-quick article has helped clear up just how many jumps you need before you skydive solo.

This is only my opinion, however! Some would argue that even the very first static line jump counts as a solo skydive, and others say there’s no real difference between a tandem jump and doing it yourself. At the end of the day, you’re still throwing yourself out of a plane!

Whatever the case, I do hope you at least understand how the solo skydiving courses work in terms of getting to that elusive solo jumping level.

If you’re preparing for or thinking about undertaking a course, make sure to check out the related articles below! I’m doing my best to build into a friendly resource for skydiving newbies.